The sad, sorrowful tale of a London summer 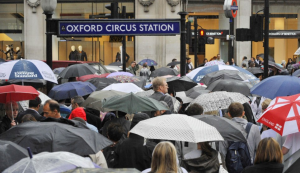 Haha New Zealand. After months of weather-related humblebragging on Facebook, now it’s our turn. Except here in London, we do it differently. Now that you’re complaining about the Mercury dropping to twelve degrees and a few days of grey skies, we’re celebrating the temperature rising to a balmy… twelve degrees.

This winter has been brutal. London never gets a white Christmas, because that would be romantic. But as soon as the holiday season ends and we return to work, the snow arrives. This year the snow has been close to constant, save for a few moments when the weather appeared to be clearing, only for a blizzard to arrive in April.

But we acclimatise. I have friends who live in Bangkok who put on their winter coats when the temperature drops to twenty degrees, and others in the North of England who go commando while it’s snowing. I endure through nostalgia. I remember Wellington summers being long and warm when I was growing up, now I realise that I’m not strong at remembering. In reality, the warm weather probably lasted a month and a half, and the temperature was closer to the high teens than the late twenties. But it felt warm.

Which brings us back to London. We only get a couple of weeks of warm weather a year. The rest of the time, the sun hides behind a blanket of dark clouds. It’s so bad, that newborn babies are often prescribed Vitamin D pills so they don’t develop rickets. 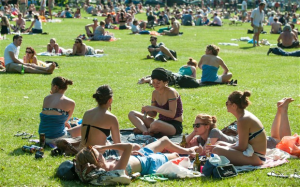 London doesn’t have beaches. So when the sun comes out and the temperature hits 16 degrees, a remarkable phenomenon occurs – the parks fill up and the clothes come off. You can’t walk through a royal park without stumbling over reclining bodies in various states of undress. And we’re not talking just a shirt off here and there.

We’re talking speedos, string bikinis (sometimes without the tops), all contrasted nicely with the delightful English tan. In New Zealand, we had the folks at Trumpet spelling it out for us: “Togs, togs, togs… undies – if you can’t see the water, you’re in underpants.” Sadly, Trumpet’s public service didn’t make it this far.

The English tan is a remarkable thing, sunbathing is all or nothing here, it comes in two shades: pink (summer) and orange (all year round). For some reason, a fair percentage of the natives are under the impression that if they lie out in the sun for hours, they’ll magically develop additional melanin. Fortunately(?) others have worked out that the colour isn’t worth the pain, so they’ve moved on to the fake tan. Except they haven’t worked out that some complexions just don’t work with “St Tropez – Rich Mahogany”.

The darkest shade of fake tan accounts for 50% of fake tan sales at SuperDrug. So there’s your choice: girls with bacon-crisp skin that looks like it’s about to peel off; or girls who look like they’ve been bathing in varnish.

And then, just as quickly as it came, the sun is gone,  retreating behind the veil of English cloud, leaving pink, vitamin deficient, depressed Londoners in its wake.

So while you’re wearing a single extra layer, or turning up the heat pump by a degree or two, spare a thought for us trying to make the best of a raw deal. Oh and maybe a little prayer for the gulf stream, if that goes, even the northern folk might start having to wear jumpers (that’s English for jerseys).