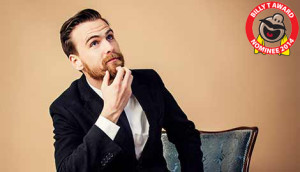 I’m noticing a trend in festival shows this year. We’re not getting the big introductions where we’re asked to go “crazy and wild” for the comic. Instead the comedian is just sort of there.

The first introduction that Brendon does is exactly that. He appears as a shadow in the corner of BATS theatre, then just ambles to the centre. Then he sits at a guitar and sings a song. It’s an ok song, nothing terribly funny about it. But then he has a couple of throwaway lines about  the song and that completely compensates for any lack of amusement we may have experienced. This nicely sums up Brendon’s show.

His second introduction followed the song and I’m super impressed to see him use music and lighting changes to also draw laughs out of the audience. It showed a performer willing to take risks and it more than paid off.

The overall concept is a good one. Brendon is the “nice guy” of his friends. That’s how everyone describes him. And he’s not sure if he’s actually a nice guy or not. So he’s telling the audience horrible stories about himself and then letting us judge whether he really is a nice guy. It’s a nice twist on the “story of how I got where I am” that we so often see in Billy T nominated shows and one that serves him well.

This deconstruction of a personality could be handled badly in the wrong hands. Because he’s telling personal stories he runs the risk of losing the audience if they are unable to relate to him (some of the things he’s done truly are dreadful). However Brendon shows a deft skill in winning us over even in the face of stuff that we would find awfully unpleasant.

His stage persona is a little self-deprecating. But it feels like it’s the sort of deprecation that actually masks a strong self-confidence. The meshing of the two means that Brendon stays the figure of fun, but the material is delivered strongly. Even when he starts heading into material that I’ve previously objected to in the festival, he manages to subvert our expectations and deliver a fantastic deconstruction of the chauvinist perspective.

He’s clearly got a lot of stand-up comedy influences. The show seems to pay homage to Dmetri Martin, Flight of the Conchords and the longer-form story telling of Louis CK and while a cynic may call it derivative, I felt like Brendon put his own stamp on the material enough for it to be great.

The most impressive part of the show for me was how he deftly wove earlier gags into later parts of the show. There were some lines that seemed incongruous to me early on, however these were made to be parts of brilliant later jokes. I’ve seen very few NZ comics manage this as well as Brendon did. These go beyond call-backs, into more arching narratives. And there were so many of them as to become dizzying in their genius.

If I was to level any criticism at Brendon it would be that sometimes it can take a bit long to get to the funny, with some minor edits this problem would vanish though.

The ending of the show is a wonderful emotional denouement. We reflect back on earlier gags to fully understand why he isn’t a nice guy. Each moment of the show, each statement has been carefully constructed revealing a depth of script writing that I haven’t yet witnessed this festival. Brendon doesn’t just do standup comedy, he performs it.

[…] saw Brendon Green in the 2014 Comedy Festival in Some More Mr Nice Guy, and it was one of the most well written shows I had ever seen. Brendon danced us backwards and […]