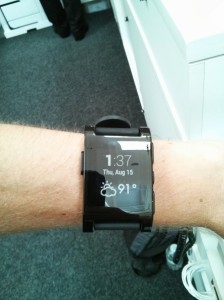 The new wave of narcissism will be ushered in by electronics manufacturers like LG, Sony and sports superbrands like Nike. But unlike the Greek myth, this self-obsession will go literally beyond skin-deep.

In the last couple of years there have been breakthroughs in miniaturising sensors that can do anything from measuring the steps you take in a day, checking your pulse rate, to measuring sleep patterns. These sensors now draw far less power than ever before. Coupled with maturing wireless technologies like data transfer (Bluetooth, WiFi, etc) and wireless power/recharging technology (Qi) and the result is an ocean of wearable tech, just like the ones seen littering the Consumer Electronics Expo this year.

We’ve already seen Sony, Samsung and Pebble attempt smartwatches to varying success, and Google’s Glass project is certainly inspiring but Razers’ smartband Nabu represent what I think will become most popular in the next five years. It’s a low-cost rubber bracelet with two very basic screens to show calls/emails/texts/appointments from your phone but also measures your vitals during the day and sleeping patterns. What Razer is doing is opening the device to developers who will build apps to ‘gamify’ your everyday life. Manage to run 5km in under half an hour? The character advances a level. Only the ‘character’ is you!

Apps will appear where you will be able to map your sleep cycles achieved, calories consumed and energy burned –  after entering your age, gender, weight and height. This will no doubt feed the neuroses of the psychotically fit and add fuel to an increasingly popular semi-scientific movement called ‘The Quantified Self’ or ‘body hacking’, to map all possible biological data about your body and mind at all times.

This constant monitoring of the self is going to end badly. The worst affected will be unable to live without measurement, insistently plugging in every morsel of food into an app on their mobile. Even the casual participant in this movement will have another reason to look at their screen when meeting with friends to measure how many joules the walk to the cafe erased. Weight-loss coaches could seize serious opportunities to build high-tech programmes for clients and while the fad will capture the masses for a time, I predict after a few years the fad will fade.

This next decade will be a hell of ride and will claim victims in the more sensitive sectors of society (I’m especially worried about the effect this could have on adolescents) but ultimately I think a middle ground will be found. After some rocky years an acceptance that people and metabolisms are innately biologically different will contribute to a cooling of this trend of constant self-monitoring. A counter wave of young people deliberately shirking monitoring systems could become popular in its wake as the pendulum of cool swings in the opposite direction. But for the immediate future, get ready for a very detailed look at yourself in the digital mirror.

“What Razer is doing is opening the device to developers who will build apps to ‘gamify’ your everyday life. Manage to run 5km in under half an hour? The character advances a level. ”

You know, back a few years ago I decided that one of the reasons that people liked playing World of Warcraft and other similar role playing games is the sense of achievement that they get when they advance a level, down a monster and get new gear at end game. This gamifying may bring about such a sense of accomplishment for people’s health and thus we end up with a healthier society.

The problem arises with people being overly competitive and putting others down. “ZOMG, you haven’t done a sub 4 minute mile – LOSER”. In other words the problem isn’t that people will be looking after their health more with all the necessary information to do so but that some people are arseholes.

Mr. T. Bastard is quite correct. I’ve been a heavy self quantifier for over 10 years now, and although I don’t use the technology as a crutch, I certainly enjoy seeing the fruit of my labours in LCD black on white (or sometimes colour). The “movement” as it stands at the moment is at an early stage of development and acceptance; the better the connectivity of the devices gets, and the more seamless the sharing and leveraging of data, the more useful it becomes.

Anything anyone wishes to use to escape the clutches of obesity, diabetes, or any other form of ill health whose onset might be assuaged by exercise is alright by me.