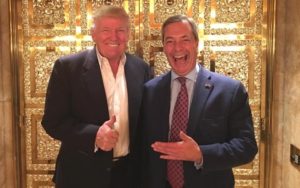 Since *that* election I have read myriad reasons why it played out the way it did, seen so many tweets about it and most of the ones that I’ve been exposed to have been hot takes from white dudes talking about why we shouldn’t call the working class people who voted for Trump racists and how that shuts them down and excludes them so of course they’re going to go play in someone else’s sandpit and what were we thinking how dare we behave so high and mightily and look what you did, you unleashed Trump?

So I thought I wouldn’t enter the fray. I wouldn’t contribute. Because we don’t need people like me speaking on behalf of others to explain why what happened, happened. So I’m not. Instead I’m going to talk for me.

I think there are so many different reasons for why Trump got elected. We may never properly understand why the polls were so wrong, why people broke the way they did. Whatever. I want to talk about this “let’s not call people bigots or racists”.

I’m getting really frustrated with people who are denying the racism thing and saying that we shouldn’t call Trump voters on it.

Trump is a racist, and a bigot, and a misogynist.

And if you voted for him then you either a) support these; b) are ok with them; or c) are willing to overlook them. None of those options is ok to me.

I will not be told not to call out racism and misogyny when I see it. I will not be told not to call people bigots if they are displaying bigotry. I will not be told to put on kid fucking gloves about racism, misogyny and bigotry, because that is not who I am. I am going to try and speak out against these whenever I can. Because if I don’t then I am fulfilling one of the three qualifiers above and I am damn well not going to let that happen to me. I am not that person. I make mistakes and get things wrong. But I am not a bigot. I am not a racist. I am not a misogynist and I am going to spend the rest of my life trying to stop those forces for evil.