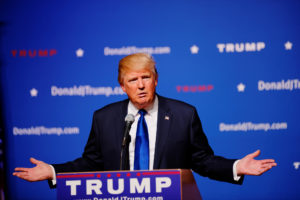 Hello friends, I’m not going to be writing a whole lot of these pieces but I thought I’d dip my toe back into the punditry land, if only for a brief swim.

Today Donald Trump went from being really likely to winning the presidential nomination for the Republican Party to being the presumptive nominee. Not a huge difference, and in fact if we’d been talking about any other candidate in any other race to date, we would have called Trump the presumptive nominee for some time now. But Trump is different.

My rationale was that the Republican National Committee wouldn’t let it happen. That they’d bring him down the way they’d seemed to bring down Newt Gingrich and Rick Santorum in the 2008 election. Or the way they’d coalesced around Dubya in 2000 at the expense of McCain. I thought that the RNC controlled the money and so would just pour it all into one candidate’s coffers and tell the electorate to vote for them (I genuinely thought Scott Walker would be it. He pulled out first).

But this post is about more than my appallingly bad efforts at political forecasting in the United States (though I comfort myself that all around the internet right now there are ‘think pieces’ being written about how everyone got it so wrong with Donald). This post proffers the view that Trump’s election to Republican candidate for President of the United States is good for democracy. Because as distasteful a human being as he may be (and he is very distasteful), he is truly a candidate of the little people (mainly white male little people) but he has received more votes than any other candidate, won more primaries and caucuses and delegates than any other candidate and he’s done this despite the ‘establishment’ saying “don’t” and that’s a great sign.

My own theory on how he’s done so well is that he’s sort of the lashing out of the white male who is feeling his grip on power slipping and instead of seeing this as a fair and equitable thing to happen, he is seeing this as an affront to him and that now white man is the target of discrimination. Woe betide us. It’s so hard being white and male etc.

And so this could* be the death rattle of the MRA’s movement. Their last desperate gasp. So that’s another happy bonus.

So what all this means to me is that people still have a say. I was a bit cynical about the strength of people-power but ironically Trump’s rise has made me feel optimistic again. That the establishment doesn’t always win. That we won’t always listen to “the man”. So the next time you’re talking to someone and they say “it doesn’t matter who I vote for, they’re all the same” or “the corporations just control everything now” you can proudly say that Donald Trump is our beacon of hope.

Comedy fest review: Neel Kolhatkar in Neel before me